Just a few weeks ago NASA announced that the James Webb Space Telescope (JWST) had completed its final testing and is being prepped for shipment to its launch site.

4D Technology has been involved in the JWST project for almost 20 years. NASA deemed testing as one of the essential requirements for the project, including full-up testing of all telescope systems to ensure a successful deployment, and years of scientific discovery.

4D Vision (which became 4D Technology in 2002) got involved in JWST during its Advanced Mirror Technology Development program. This phase of development determined the best materials, fabrication techniques, etc., for the segmented main mirror and other telescope optics. The testing requirements were daunting: large test components, noisy facilities, long measurement paths, and environments simulating the conditions of space. Traditional phase shifting interferometers would not be able to cope with the noise and vibration. A novel solution was needed. 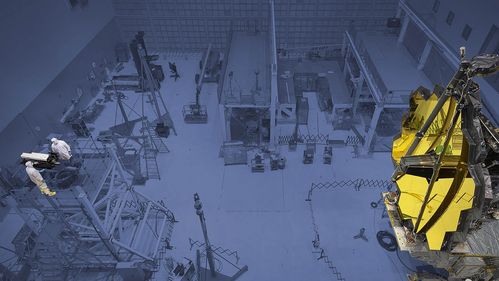 “Dynamic interferometry has been a key enabler to the JWST project’s success,” said Steve Martinek, former director of sales and marketing at 4D. The company’s patented pixelated sensor technology enabled nearly instantaneous phase measurement and high-speed averaging. This meant that interferometers incorporating the sensors could measure despite vibration and with reduced susceptibility to air turbulence, even over long measurement paths. NASA engineers had found the technology that they required.

As the JWST project advanced, 4D became involved in many critical aspects of optical testing:

4D Technology instruments were used to test all of the major optical systems of the JWST telescope. Image courtesy NASA.

“The JWST project was central to 4D’s development,” said Martinek. “It was fundamental to 4D not just in terms of income but also in credibility and exposure, which were essential for a startup.” Those early successes paid off. 4D Technology is now a wholly owned subsidiary of Onto Innovation (ONTO)—we’re thriving and are recognized leaders in precision interferometric measurements.  Meanwhile of course JWST has successfully completed all performance testing. As of this writing, JWST has a launch date of December 24, 2021.